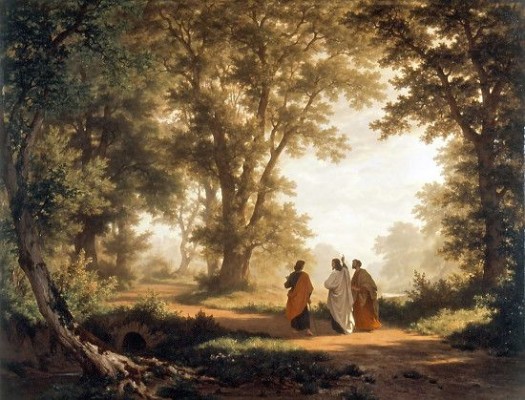 “But we had hoped that he was the one who was going to redeem Israel.” – Luke‬ ‭24:21‬ ‭NIV‬‬

I suppose this may simply be a continuation of my thoughts from my previous article about winter dormancy not being the same as death, though it may feel no different in the midst of it sometimes.

But fair warning, this one will be a cliff hanger. Since I have too many thoughts on this story, today’s article is only part 1 of 2. 🙂

One of my favorite stories from the days of Jesus’ ministry is about the two disciples having a conversation about the tragedy of Jesus’ death by crucifixion. From a human angle, this had to have been an emotional exchange between the two men. Of all the events in the New Testament, being present at this one might just be the single event at the top of my bucket list. That may seem strange to you, given all the miraculous moments to pick from. Perhaps it will make sense after you’ve read all my thoughts here, for I think these men had a private hearing to the best expository sermon ever taught in human history.

From my perspective, here’s what’s going on. These were two of Jesus’ disciples. They had eaten with him, followed him, been taught by him, and had their lives shaped by him. In short, they believed (trusted) in him. But they also believed (assumed) certain things would be true about his future ministry, eventual kingdom and their place in it. They had big dreams about what that would be like.

We could say that Jesus’ death felt more like death than dormancy – which only makes sense from a human perspective. So now, let’s pick up a few of the random tidbits of the story and add some commentary along the way.

But they were kept from recognizing him. Jesus didn’t let them know his identity during the entire conversation along the road to Emmaus (v. 16). He’s influencing these men as they walk along their way, but they are actively prevented from knowing who it is doing the influencing. Which makes me wonder: in what ways might God be working in the background (or right in front of us) – influencing our thinking and our walk – and yet, thus far, we’re prevented from seeing him directly? Many of us feel as if we’d understand God better if he’d simply act more like comedian Bill Engvall, saying “Here’s your sign!” Is it possible that our faith is more stretched and strengthened by his hidden influence, as displayed here?

What are you discussing together? Jesus knew the intensity of their emotions, recognized it and mirrored it back to them (v. 17).  This is the essence of human empathy, a relational trait we humans inherited from our Creator.  Also notice how well empathy worked for these disciples. Immediately, they’re in touch with their sadness and begin sharing deeply from their pain.

In my latest book, Unburdened: The Christian Leader’s Path to Sexual Integrity (InterVarsity Press, 2015), I discuss the importance of having a “theology of suffering”. Isaiah 53:4-5 says that Jesus took upon himself our pain and bore our suffering. While we can and should interpret this as Jesus having suffered a separation from God the Father on the cross because of our sin, I think it goes much deeper than this – and much more personal.

From Unburdened: “Do you realize Jesus knows the intimate feelings of your sorrow and the very personal details of your unique grief? I’m not talking about him knowing the facts of your trauma or difficult circumstances. I’m saying he felt them on the cross. Somehow, the God of the universe in the person of Jesus – with a human body and with human emotions just like you and me – has, in a moment in time, felt the weight of your particular suffering.” (p. 84)

He also knows how to ask just the right questions to get us to talk more about it.

What things? In the person of God the Son, Jesus knows not only the situation but exactly what’s in our hearts (v. 18). He doesn’t ask for his purpose of knowing but rather for leading us where we need to go. These men thought they were on a journey to Emmaus. In reality, they were on a journey towards a deeper experience of God’s heart and a purpose for their pain.

For now, know this. We may not be able to see Jesus walking with us as we work through our suffering. But he is with us, perhaps influencing us more than we’re aware right now. And he not only cares about our grief, he has experienced it intimately as the Man of Sorrows on our behalf.

But just how does he care for our sense of hopelessness?

That’s what I’ll save for next week. Getting it Backwards Keeps Us Stuck